It can’t be easy being an icon. Yet it seems that Joe Cosniac, who, along with then partner, Nick Pacelli, opened Paesano’s in the post-HemisFair culinary frenzy of the early 70’s (a time that also brought us Crumpets’ Francois Maeder), has been a fixture from the get-go. The closing of his early outpost on McCullough is still lamented by many as much for its low-style, labyrinthine layout as for Cosniac’s take-it-or-leave-it attitude.

The attitude hasn’t changed, of course, and the dishes that themselves became locally legendary (you all know what they are), also endure. But it seems that Cosniac has frequently been forced to open new operations — in places as far away as Fort Worth and Aspen — simply in order to get beyond a certain shrimp. The local Paesano’s empire grew to include Zuni Grill and Rio-Rio Cantina on the River Walk, both with menus riffing on a Southwestern theme, for example.

But if Paesano’s itself upped the architectural ante in its River Walk and Basse Road locations, those menus, with some exceptions reflecting Cosniac’s own drift toward less sauce-driven foods, remained kissin’ cousins to the original. With the opening of the 1604 location, however, all bets are off.

Of course, while as little as five years ago a move to 1604 would have seemed like getting out of Dodge, now it’s almost obligatory for restaurant survival. Yet even in this heady atmosphere of expansion and prosperity, Paesano’s stands out — first for its almost basilica-like interior with a gleaming, open kitchen as high altar, then for its high-style, Hill Country patio framed by massive limestone blocks and enlivened by a naturalistic water feature. But most of all for the menu; short of having Cosniac cook for you himself (which I have on very good authority is a transcendent experience), this is the best food I have ever had at any Paesano’s operation.

Both lunch and dinner do retain a core of “The Classics” as a nod to traditionalists. And there are pizzas — though largely of the prosciutto, arugula and artichoke ilk, plus some lasagnas and spaghettis mixed in with the premium pastas. (“If a customer has a size nine shoe, you don’t give him a 6 or a 12,” he recently said — perhaps a sign of mellowing.) But a sublime luncheon salad of shaved fennel, smoked salmon, apples and bagel crisps seems worlds away from red sauce and redder carpets. It and most other new menu items are the work of Chef Clark McDaniel, recruited from a now-closed Cosniac operation in Fort Worth, and at a recent dinner, each offering was better than the next. The crescendo, in fact, got deafening.

Sitting outdoors on a rare, balmy evening — nearly full moon above, burbling waters alongside and only a few mosquitoes to break the spell (well, nothing’s perfect) — Dining Companion (resplendent in a fresh-from-Hawaii tan) and I began with a split of Gruet Blanc de Noir from New Mexico, a perfect wine for sipping under the incipient stars. (The impressive wine list is not serious in its selection of wines by the glass, but there are splits of many wines, and a glance around revealed them to be popular.) It was also nigh unto perfect with an appetizer of rock shrimp ragu with soft polenta and corn sliced straight off the cob.

Though I might have wished for a slightly more stew-like ragu, this dish is really about the rustic polenta, and the rock shrimp are almost accessories. A split order of pasta followed as a warm-up to the entrées, and I’m ashamed to admit that I stopped only slightly short of mopping up all the sauce with some of the rustic bread that was all-too-available.

Veal, spinach and portobello-stuffed shells were the happy bearer of the lusty tomato sauce, tamed by an equal amount of a very creamy velouté-like white. The shells themselves were blissfully tender, and the just-assertive-enough stuffing sang within, all adding up to the best pasta dish of recent memory. The succeeding salad, though sporting fresh and sturdy greens, was a letdown, because of a dressing that, whatever its components, tasted of tired lemon.

The moon continued to rise, however (service, if willing and friendly, was not distinguished by its speed, so we had time to chart its progress across the sky), and the popping of a cork on a bottle of Belle Glos 2003 Sonoma Coast Pinot Noir caused spirits to rise even higher. Little did we realize how high until the Moroccan-spice lamb shank arrived. This was one of those rare match-made-in-heaven experiences, when the wine’s soft and spicy character paired perfectly with the cinnamon-spiked sauce additionally enlivened with dried apricot and pine nuts. The earthy pinot also marched straight down the aisle with the fantastic, fork-tender lamb.

(If you’re feeling especially flush, the $90 Belle Glos Clark & Telephone Vineyard Pinot, with its heightened spice, chocolate and coffee character, should be the royal wedding equivalent, all trumpet fanfares and voluntaries.) How high the moon, indeed.

Which is not to say that the roast chicken with truffle butter and a mushroom-marsala glaze was chopped liver — far from it. McDaniel roasts his chicken in a steam-injected German oven, and that alone accounts for much of its moist appeal. But the bird doesn’t lack for flavor, either. DC preferred the dark meat, which did stand up better to the assault of truffle flavor (just enough) and equally earthy sauce, but I’d call it a toss-up. I’d also call its serving on a tartlet filled with what appeared to be creamed Swiss chard just a tad excessive; the palate hardly knew where to rest. Sampled again cold (yes, we couldn’t finish), all the flavors seemed to be in better balance. I’m thinking an aged blanc de noir Champagne.

On the advice of our sure-of-herself server, we relented at dessert time and shared a piece of key lime pie. She was right; though the rum mango sauce got lost in the shuffle, the creamy-tart pie was perfection, and a scattering of toasted coconut served to elevate it above the expected. We will continue to expect much of McDaniel — every time a fly-me-to-the-moon experience is necessary. 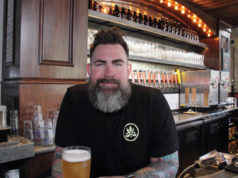