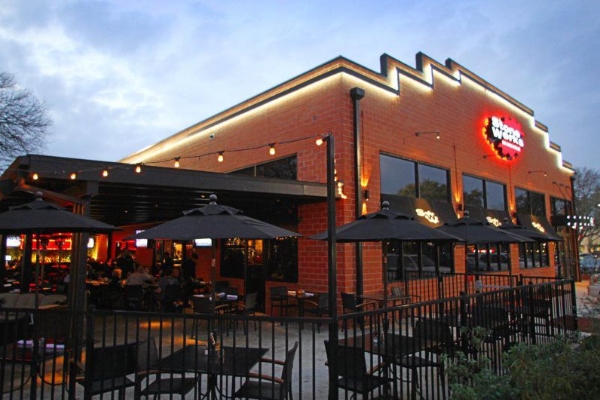 One might not think that a move of, oh, a half a mile or so might make much of a difference to an already established restaurant. But a bigger space and a degree of enhanced visibility seem to have been just what Stone Werks needed; on two occasions the restaurant’s latest outlet at Basse and Broadway in the Shops at Lincoln Heights was jumpin’— and just loud enough if you happen to be an oldies fan. There were a few silver-haired sorts in the crowd, too, suggesting that the audience for artichoke dip, Kobe burgers and 14 Karat Cake with cream cheese frosting and roasted brown sugar pecans has broadened. Getting right into the act one noon (though not so far as to have the crispy calamari) we ordered the salmon roll (not what you sushi lovers might think) and the crawfish-stuffed mushrooms (this one you would likely have nailed).

The Stone Werks menu is not a model of innovation; most of the dishes will seem at least generally familiar. But the salmon roll is an example of thinking outside the Bento box. Consisting of the fresh fish rolled in spinach (green onions are also alleged, but not much in evidence) and further encased in a kind of egg roll wrapper before frying, the dish needs just a little extra inherent zing to be amazing — a few shreds of slivered ginger, perhaps. The accompanying slaw with a ginger, sesame and soy sauce would be at home on many Asian menus and almost steals the show. There are mushroom caps conventionally battered, fried and served with cream gravy on the Stone Werks menu, but the crawfish-stuffed variant, with the added interest of a champagne cream sauce, seemed just different enough to make it worth a look. If you have some bread, let’s suggest this: Use it to sop up the winy sauce; it’s good but too thin to be of much use to the caps. Said caps are still nicely sturdy for their part, but the stuffing sports more bread than mud bugs, which doesn’t sound like such a bad thing put that way.

Little if anything is left of the look of the restaurant, a Gulf Coast seafood joint, that once occupied SW’s new digs. Among other decorative touches reinforcing the rocky theme is a wall, recalling gabions usually used to keep earthen slopes from eroding, consisting of large stones behind a rugged wire grid. It’s handsome and gutsy and might have been used more. We expected the lamb burger, “freshly ground with sun-dried tomatoes, Parmesan cheese and herbs,” to be gutsy as well, but it let us down. There was also prosciutto, spinach and red onion, but the mint and basil mayo was faint and the goat cheese absent altogether. So many ingredients may not have been necessary in the first place, but once offered need to be proffered. Unexpectedly, it was tilapia robed in a potato and Parmesan crust to the rescue. Tilapia’s main virtue is normally that it’s farm raised and, in most cases, nonpolluting. In this case, it was also extremely moist and flaky, the crust was a sensation of crunch and taste, and, despite lacking most of its advertised sage component, the butter cream sauce was just what was needed — and in just the right quantity.

Sautéed mixed vegetables had been substituted for the expected asparagus, but they were firm and flavorful, so nobody was complaining much. Desserts, including the above-mentioned Karat Cake and the Rockslide Brownie with fudge, ice cream and more, were politely declined. Admission of sorts here: Since the menu is the same all day long, I went both times at noon. Given that there’s a daily happy hour at the prominent bar from 3 to 7, the evening ambience might take on a different tenor. The cream of poblano soup, however, should be steadfast in its consistency — which is to say, thick, creamy and just spicy enough. Chunks of chicken breast that populate the soup are also reasonably tender, making this dish one of the best tasted to this point. Until, that is, the Big Rock Flatbread arrived.

The lavash-like bread is presented atop a footed metal stand, and it looks — and is — daunting for one. As usual, the litany of ingredients is a long one, and it would be hard to say if all were present. The list for The Rustic starts with truffle oil, however, and though enough of the five cheeses made themselves known, along with prosciutto, cubed tomato and arugula dressed in a citrus vinaigrette, someone in the kitchen must have been chastised for once having a heavy hand with the truffle oil; I tasted none of it. To its credit, The Rustic was good without and even survived to serve at dinner. Dessert, “made for sharing,” fell by the wayside once again. But if you and a companion fall for the Frozen Frappuccino Pie with ice cream Oreo cookie crumbles, caramel and whipped cream, I hope you have a salad beforehand; that list is long and extremely varied.