Seafood excels with the star treatment. The Silo architectural signature is alive and well at the new Terrace Oyster Bar: Yes, you do get into an elevator—here as at other Silos the brief ride serves to remove diners from the prosaic world of parking lots and shopping centers while it sets the stage for an elevated dining experience. But there is a twist at the new operation: Should you be obliged to wait at ground level before ascending to a table, you can buy a card that will get you wines from the classy dispenser that’s prominently displayed. There’s more than one way to banish the mundane.

Whether upstairs or downstairs, we suggest that you make that first glass a snappy white (ours was an unoaked 2012 Labouré Roi Macon Villages), as you’ll want to take immediate advantage of the excellent oyster options. The selection changes frequently and tends to favor the East Coast; out of a sense of equal opportunity, we picked the one West Coast example (Fanny Bay British Columbia) to pit against New Brunswick’s Hurricane Island—and the difference couldn’t have been more pronounced. Where the Fanny Bays were bright, saline and finished with cucumber, the Hurricane Islands were plumper, sweeter and just faintly tinged with seaweed. You are allowed to like both with or without the available sauces and/or horseradish, but we bet you’ll prefer to go naked. A Lucullan seafood platter that adds shrimp and king crab to the mix is also available, as are Silo’s signature, chicken-fried oysters.

It’s got to be hard to follow the crowd-pleasing oyster act with equally successful starters. Though it seems uncharitable to look lump crab remoulade in the mouth, our fried green tomatoes came across as somewhat overdressed by the time other accessory items such as avocado, baby arugula and basil oil were added; the tomatoes got lost in the shuffle. A snapper ceviche, on the other hand, needed a little more of the advertised serranos (and a touch more lime) to make it truly sing. Big plates emerge from the bustling, open kitchen fully ready for prime time; assuming a blackened and grilled swordfish to be typical, the chef seems to have a deft hand for cooking fish to just the perfect point. We do have to admit that the pulled pork seemed superfluous in the accompanying dirty rice and that the béarnaise might have used a touch more tarragon, but the fish was good enough to transcend any missteps by bit players, real or imagined. The lingering burn that accompanied the Shrimp Fra Diavolo was certainly not imagined; this dish took its name seriously. But the star of this show might well have been the stunning house-made squid ink pasta spangled with bits of sundried tomato, tossed with spinach and adorned with nasturtium leaves, a garnish more chefs might consider. (The colorful blossoms made an appearance elsewhere.)

The hit of the evening, however, had to be the ultra-lush lobster ravioli, perhaps more accurately described as lobster with ravioli. Beautifully butter-poached claws, helpfully removed from the shell, topped the ricotta-stuffed pasta bathed in more butter—a case of over-the-top being exactly right. (At lunch, an only slightly less luxurious lobster roll is an option.) We could certainly have picked a big, buttery chardonnay to accompany the lobster, but the spicy shrimp and the blackened fish suggested that we could also go with a nimble red, and the 2013 Rollone Monferrato Rosso from Marchesi Incisa della Rochetta both filled that bill handsomely and eased us out into a nippy night very nicely indeed. We think we’ll wait for next spring, or one of San Antonio’s blissfully balmy winter days, to experience the outdoor terrace, blankets and heaters notwithstanding. 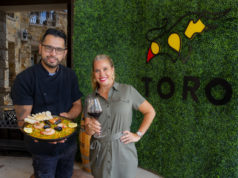 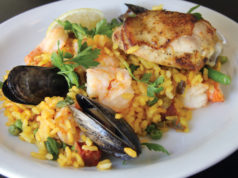 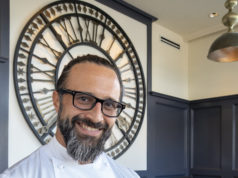