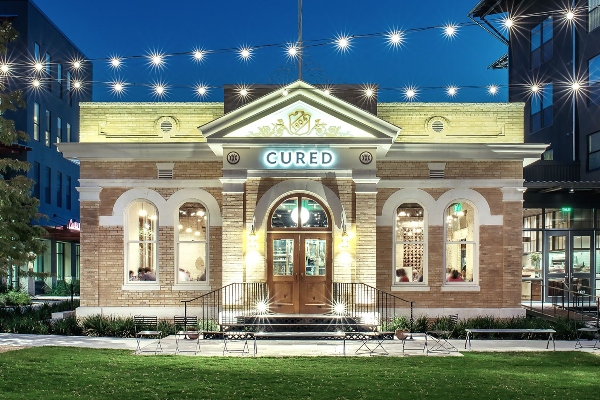 Meats come into their own here

It’s easy these days to feel a little overwhelmed by the density of mostly new construction at Pearl. Fortunately, there are a few small gems scattered in and around the development to relieve its otherwise all-at-once aspect. Cured, chef Steven McHugh’s recently opened restaurant, opposite Arcade and adjacent to Local Coffee and The Twig, occupies one such structure, the old administration building, and it has been lovingly burnished to a discreet luster with replica tin ceilings and “windows” in the floor illustrating the historic footprint. As interesting as are the building’s architectural aspects, however, it’s a glassy display case that dominates the interior. Chock-full of hams on hooks and sausages on strings, it underlines both McHugh’s Midwestern roots and the Southern culinary chops he acquired working for New Orleans chef John Besh, for whom he opened Lüke locally. Upon being seated — at a table or the accommodating bar — immediately order a selection of charcuterie, available in increments of three selections. It’s an illustration of McHugh spreading his own wings.

We have in general been fonder of the cured meats than the patés and mousses, but they are nevertheless an essential ingredient in, say, a six-part platter. Check out whatever pork rillette might be on offer, then move down to a sausage (spring onion was recently good), a cured duck breast, a 60-day pork shoulder, perhaps a 180-day lamb (deserving of a $4 supplement). If the hams don’t achieve the profound (and, to some, excessive) saltiness of a traditional Smithfield, they are still to be admired, especially with the house-made lavash, various mustards and pickled and brined items such as celery and even Poteet strawberries. A Texas craft beer would not be unwelcome in this company. Say a Karbach Weisse Versa Wheat? Vegetables aren’t given a big berth on Cured’s menu, though the chef does utilize local and seasonal produce in many dishes; we suggest ordering the beet salad if it’s on the list if only to experience the beet “cracklings.” Then continue to a lusty smoked pork gumbo topped with crisp okra. Or, more adventurously, to the warm, sliced pig’s head, a cheeky presentation assembled from steamed and reconstituted flesh from the cabeza that has been sliced and served in a light vinaigrette. It only needed a little sea salt to make it sing. The cabrito sliders, if available, are perhaps better for an afternoon snack while sitting at the bar, but the accompanying chayote pickles are worth experiencing no matter how you get them.

We would not have thought to order the pan-seared quail if not for a suggestion from our affable waiter one night. (Interestingly, the pedigree of the side-dish Swiss chard is noted on the menu, but not the Bandera provenance of the quail.) But these turn out not to be your knee-jerk, partially boned birds; rather, they have been cooked sous-vide then made into sausages that are grilled and served with reduced pan jus, a process that yields much deeper flavor. A delicate parsnip custard and grits boldly flavored with mole rounded out the plate. The noise level was beginning to rise by the time we got to the quail, though it never got to the punishing level favored by some restaurant owners — a very good thing as the Crawfish Love Letters was a plate deserving of some contemplation, frosty glass of rosé in hand. Despite all the emphasis on cured products, you might think of this testimonial as emblematic of McHugh’s approach: Though crawfish were the headliners, they were also good ensemble members along with ravioli filled with crawfish farce, tender spring peas, bits of bacon, shaved parmesan … and cream, glorious cream. As the dish may well be off the menu by the time you read this, file it under spring and vow to come back.

The same goes for the Poteet brown butter strawberry tart, a welcome reworking of the standard berry-and-rhubarb model (sans rhubarb), nutty rather than gelatinous. Do not be daunted by the fact that the pie is (or was) served with a savory scoop of sweet pea mousse; despite the need for another touch of salt, it was amazingly good with the tart and its chopped pistachios. Spread your own wings as well, in other words. 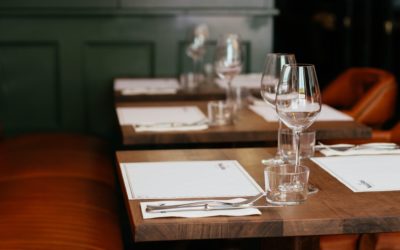 CULINARIA Restaurant Weeks The bi-annual extravaganza returns! (January 15 through 29 with participating eateries in San Antonio and neighboring counties) Participating restaurants will offer special three-course prix-fixe menus: $20 and $30 for lunch, and $35, $45...

END_OF_DOCUMENT_TOKEN_TO_BE_REPLACED 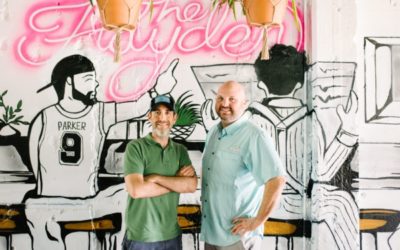 By Janis Turk “She thinks my meatloaf’s sexy,” I mused as I pulled out of the parking lot of The Hayden, a relatively new diner on Broadway. I’d just enjoyed my first meal there and landed a nice impromptu visit with owner/chef Adam Lampinstein between his busy lunch...

END_OF_DOCUMENT_TOKEN_TO_BE_REPLACED 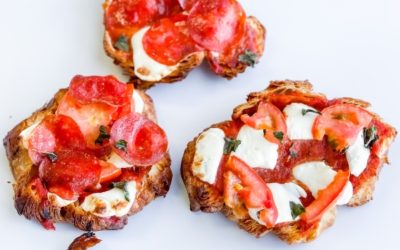 From the ingenious brains behind Cereal Killer Sweets…