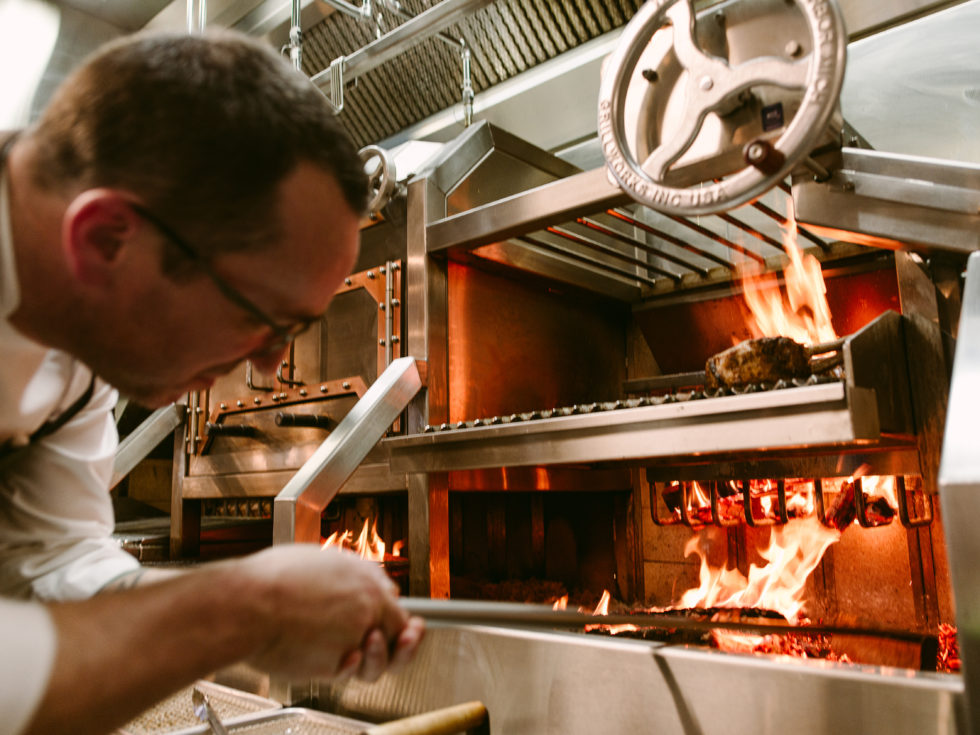 Keeper of the Flame

Chef Steven McHugh is not cool.

Or so he says.

As we tour his new River Walk restaurant, Landrace, the likable local celebrity chef mentions in passing that he was never one of the cool kids in school.

But how could anyone uncool have two of the most popular restaurants in town?

Landrace, debuting in February at downtown’s new Thompson Hotel across from the Tobin Center, and McHugh’s game-changing gastropub, Cured at Pearl, are both smoking hot.

At the burning heart of Landrace, an eight-foot-long, gleaming, dragon-like, custom Infierno X100 grill hisses, smokes, sizzles, and roars with ferocious, fiery leaping tongues. Its industrial chain-and-gear wheel lift lowers and raises meat above blood-orange embers. Dine at the counter and stare into its Dante-esqe soul.

Grills like this belong in Buenos Aires, but they’re not what foodies expect to find along the River Walk.

Still, in spite of this wood-fire wonder, Landrace is neither a Texas barbecue joint nor an old-school steakhouse.

“I like the term ‘Texas terroir,’” says Chef McHugh, “The focus is on place: food from the Texas earth, including ‘landrace’ ingredients found elsewhere that, when brought to a new region, thrive, and evolve, becoming even more dynamic.” Landrace and terroir are terms often associated with animals, crops, and grape varietals that adapt well to a new place—just like McHugh.

“Ever since my wife Sylvia and I moved to San Antonio, life got better. Texas really resonates within us,” says McHugh.

If that’s not cool enough, McHugh has been nominated five times for a James Beard Award.

Eventually, all roads led to Landrace.

At first glance, the Landrace menu may read a tad sophisticated. But break it down, and it’s simply local staples: steaks from South Texas cattle, quail from Bandera, Gulf seafood, ranch-style pork chops, Hopi corn hushpuppies, Texas black rice, wines from Lubbock grapes, and greens from local gardens. Although his focus leans local, if the freshest trout is found in Idaho’s Rocky Mountain streams, McHugh has it flown in.

The basics are all here, like a dynamite chicken club sandwich, a Wagyu beef burger, and alluring desserts. Still, McHugh twists the traditional, making his French dip with mushrooms, and serving carrot cake with prickly pear icing and butterscotch made in-house from single-malt Scotch.

Out front, cages stand stacked with mesquite and oak. Inside, a spacious modern mid-century dining room, with monochromatic colors, warm wood-grain tables, buttery-soft leather banquettes, and shimmering touches of brass are juxtaposed against a rough chopped woodpile and showstopper grill.

Motown and R&B music drops in like a low note below high-style horseshoe-shaped booths and swank 50s-era light fixtures. Like in an old Irish pub, a hunter green leather banquette lines bar walls, while a Mad Men-style bar cart wheels about the dining room, offering Old Fashioned cocktails mixed tableside. With a chill patio overlooking the river and a curtained wine room, Landrace feels easy, like a weekend.

Perfect for dining pre-show at the Tobin Center and The Majestic, Landrace is the quintessential New Texas eatery, open for breakfast, lunch, happy hour, and a downtown dinner.

Landrace’s “Walking A” logo, like an old-school cattle brand, is but one of the handsome Texas touches that Landrace gets so right, making it all seem effortlessly cool—just like its chef.

Chef McHugh is pleased to introduce to the Landrace kitchen chef de cuisine Taylor Martin-Funk and sous chef Blake Matney, both having also cooked with him at Cured.

JANIS TURK is an award-winning food and travel writer who first interviewed chef McHugh about 15+ years and 20 pounds ago in New Orleans. Still one of his biggest foodie fans, Turk was honored to be among the first to visit Landrace before its opening last month.

This article was originally published in the March/April 2021 issue of San Antonio Woman magazine and sawoman.com here: https://sawoman.com/2021/03/dining-landrace/ 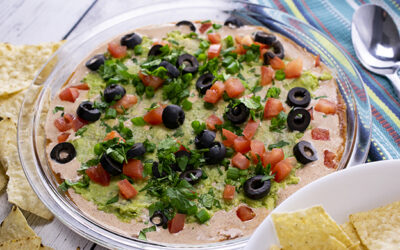 Bring Fans Together with a Big Game Dip

(Family Features) Gathering for the big game is a source of annual excitement for fans across the country, but the moment is as much about connecting with family and friends as it is the action on the field. The superstar of the celebrations is often the food, from...

END_OF_DOCUMENT_TOKEN_TO_BE_REPLACED 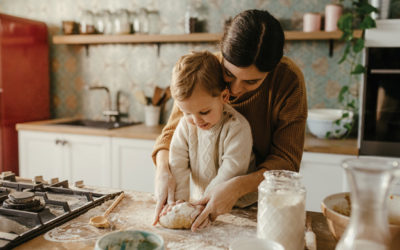 Welcome the World to Holiday Gatherings

Open your loved ones up to a whole new world by incorporating recipes from around the globe.

END_OF_DOCUMENT_TOKEN_TO_BE_REPLACED

BAKERY LORRAINE PARTNERS WITH SA PHILHARMONIC IN THE MONTH OF SEPTEMBER